Top 10 Most Expensive & Cheapest Manhattan Neighborhoods to Rent for 2020

CITY
Learn what are the most expensive and the most affordable neighborhoods in Manhattan, NY. Find out neighborhood rental averages and how much salary is required to afford to live in these areas. 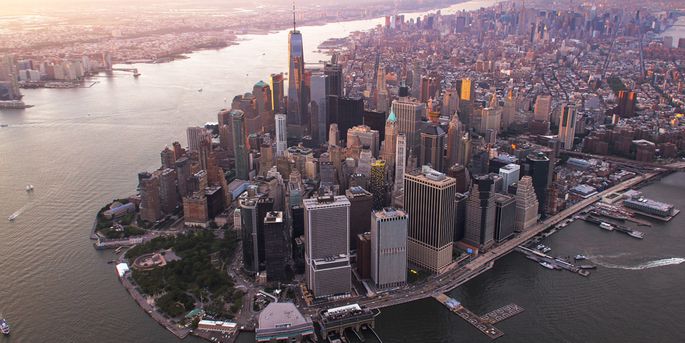 Manhattan may the city of dreams but it is also notorious for its high rent prices.

Many people interested in moving to New York City do not even consider renting in Manhattan because of this.

While some of the most expensive neighborhoods in the country are located here, there are also neighborhoods that make it possible to live here sustainably.

And the team here at PropertyNest wants you to know what those are!

First off, here is a breakdown of the average rental prices for a one, two and three bedroom apartments.

Manhattan zipcodes are known to have some of the country's most expensive real estate.

We will count down to the highest priced neighborhood in Manhattan.

PropertyNest's Salary Calculator makes it convenient for renters to find out what they need to earn to be able to afford to live in each neighborhood.

We took the average of all one, two, and three-bedroom rentals to extract the top 5 list.

Please keep in mind that the numbers are all averages within each respective neighborhood.

Midtown is not usually what New Yorkers think of when it comes to the most exclusive neighborhoods.

As a matter of fact, Midtown is mostly known for commerce, the Theater District, and shopping.

While there are quite a number of attractions, most New Yorkers don't really think of it as a place to live, but a place to go to.

However, in the past decades, it has increasingly become a place to live, especially for people who need to work in the area.

An increasing number of luxury hi-rises going up in the area, not to mention that Billionaires' Row is now a thing in Midtown, have all contributed to the rising prices.

Another attractive feature is the strategic location, being at the heart of everything. This means short commute times to uptown, downtown, Queens, and Brooklyn.

When one imagines the most expensive neighborhoods of New York City, SoHo is one that comes to most people's minds.

Once the home to thousands of immigrants in tenement housing, this neighborhood has become synonymous with cool and posh.

Soho is known for the trendiest boutiques, fashion houses, galleries, and restaurants.

However, what put it on the map is the real estate. The whole area is chock full of historic cast-iron building facades and incredible sprawling loft spaces.

It continues to be a very desirable neighborhood for New York's wealthiest.

This neighborhood has got a lot going for it and it's understandable why this area has emerged as one of Manhattan's most desirable neighborhoods.

The Flatiron District hails its moniker from one of the most iconic buildings in New York City--the Flatiron Building, which is only one of many historic and notable buildings.

The area has a long history as commercial district and only saw its residential real estate's viability beginning in the mid-1980's.

At the very heart of this neighborhood is Madison Square Park, which just happens to be the birthplace of the first Shake Shack.

Over the past decade Tribeca has risen to the top of the ranks now making it the hottest area in the city to live.

This small neighborhood has an industrial-meets-classic feel to it.

It is known for its sprawling loft and warehouse conversions.

The more "affordable" units tend to be in newly-constructed developments in the area.

It is a family-friendly area with gorgeous green spaces.

Noho may come as a surprise as the most expensive neighborhood currently as Tribeca has dominated for the past couple of years now.

But it shouldn't be a surprise that this neighborhood is making the list as it is surrounded by some of the priciest areas of the lower Manhattan such as Nolita, Greenwich Village, Soho, and the Union Square area.

What is surprising is that for some time now SoHo has been touted as one of the trendiest and most expensive neighborhoods of the city.

This tiny neighborhood of just several blocks long and three streets wide has captured the attention of those who know best.

Noho is a quiet and exclusive haven wedged between the hustle and bustle of the East Village and the West.

While you can still find some affordable apartments in the area, the real prizes are the sprawling converted loft units that will price most people out.

The two words "cheap" and "Manhattan", do not usually accompany each other in the same sentence.

Many people, even NYC residents, are not aware of the affordable living options available to them.

PropertyNest will unveil the not-as-talked-about neighborhoods that may convince readers that living in the city is possible!

It should come as little surprise to many that all of our most affordable neighborhoods reside in upper Manhattan.

While it may seem upper Manhattan is a forgotten area of the city, many of discovered not just cheap rents, but amazingly vibrant neighborhoods.

We will be counting down to the cheapest neighborhood in Manhattan to rent.

Manhattanville is a much lesser-known neighborhood of Harlem, sandwiched between Morningside Heights and Hamilton Heights.

Some may consider Manhattanville synonymous with West Harlem

The area is the lowest-located neighborhood of all the most affordable areas of the city, making average commute times to mid or lower-Manhattan slightly faster than that of Hamilton Heights.

This is a bustling area with access to the A/B/C/D and 1 train lines, as well as many shops and restaurants, and easy access to the waterfront along the Hudson, and Riverbank State Park.

Just living here gives you savings over renting in Morningside Heights which is just a stone's throw away.

Many New Yorkers may not be entirely familiar with Hamilton Heights, which is located north of Manhattanville and west of Harlem.

The area is home to a two historic districts, buildings and sites, as well as gorgeous Riverbank State Park, City College of New York, and the Dance Theatre of Harlem.

Hamilton Heights has recently seen an influx of millenials who have discovered the beauty of this historic area and the rock bottom prices.

Low rental prices may not stay that way. Even this neighborhood has seen a rise on pricing for new leases.

Similar to how Williamsburg is the hipster hangout in Brooklyn, the same can be said for Washington Heights in Manhattan.

Many millennials who can no longer afford to live in Bushwick and Williamsburg, are choosing to live here.

In addition to affordable rent; ethnic foods, green spaces, and a serene environment allures most people to take up residence in neighborhood.

It is located in the northern portion of Manhattan and offers more breathing room, if you will.

Although it seems somewhat removed from the rest of the city a commute to downtown doesn't take very long at all.

Furthermore, the apartments in this neighborhood are spacious and much more affordable.

Like Inwood, Fort George is one of the hidden and undiscovered gems of Manhattan.

It is known for being one of the hilliest and high elevation neighborhoods of the island. Some curved rising streets might even remind you of winding roads in European cities like Paris.

This tranquil neighborhood also borders Fort Tryon Park, where one can gain easy access to the Cloisters Museum.

The neighborhood has always been known for its affordability and it's no surprise that it's made the list for one of the cheapest neighborhoods to live in Manhattan.

Once troubled with crime, today's Fort George has a markedly different tone and has converted into an alternative for those who can't afford to live in popular areas of Manhattan and Brooklyn.

Inwood is also known as "the last affordable neighborhood in Manhattan," and many don't know what they are missing out on!

Inwood is located at the northernmost tip of Manhattan.

It is a very community-oriented, low-key neighborhood bounded on three sides by the Harlem and Hudson Rivers.

Over half of its residents are foreign born.

The area used to be plagued by crime and violence, but has steadily gotten better since the 1990s.

Although it does not host the luxury apartments that can be found in Tribeca or Chelsea, it does have many spacious co-ops and low-rise walk-up tenements for a great value.

If you were to name neighborhoods that just missed to top 5 picks, you could be there for a while listing all the expensive areas of the borough.

If living in lower Manhattan is preferable, you'll be able to find some deals in Chinatown, Little Italy, and even in the East Village.

This may be far a cry from the lowest 5 neighborhoods, but it's significantly lower than the surrounding neighborhoods in lower Manhattan.

If you don't mind being in upper Manhattan but don't wish to live so far north, take a gander at Morningside Heights.

This charming neighborhood is home to Columbia University and the Cathedral of St. John the Divine--the fifth largest christian Cathedral in the world.

Try the PropertyNest rent affordability calculator and find out what salary you should be making in to rent in your desired Brooklyn neighborhood.

Data for rental averages were aggregated from across different platforms for comparison and accuracy such as Trulia, Apartments, Online Residential and PropertyNest's proprietary data. The data was collected over one calendar year to reflect seasonal changes.

The Best Neighborhoods to Rent in Brooklyn 2020

Top 10 Most Expensive & Cheapest Brooklyn Neighborhoods to Rent for 2020

The Best Neighborhoods to Rent in Manhattan 2020