DATA
Rent hardship and the threat of evictions is a reality during the time of Covid. Find out how many New York tenants could possibly be affected when any eviction moratoriums expire. 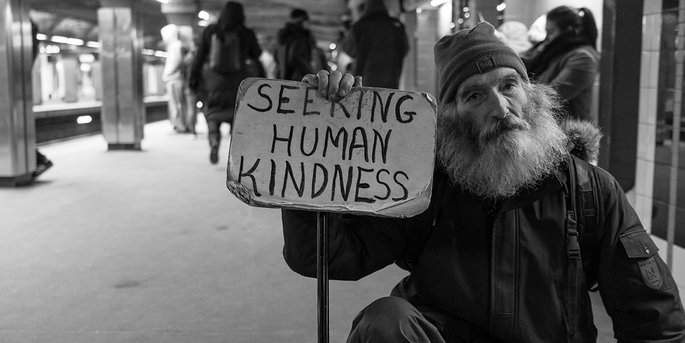 As the clock ran out on the eviction moratorium in NY State in December 2020, many wondered if the governor and the state senators would do anything to extend the moratorium, which would potentially affect hundreds of thousands renters across the state who faced rent hardship this year due to Covid-related job issues.

Right before Christmas, Governor Andrew Cuomo announced that they would be revisiting the moratorium deadline issue, which was addressed finally this past Monday, December 28, just in the nick of time for the New Year when it would end. The measure would extend the deadline

PropertyNest wanted to not only gauge how many people may be at risk, but also how many New Yorkers might have been able to work out their rent situations or had any inkling of what was in store for them had the deadline extension not come through.

“If you are a renter, how will the eviction moratorium’s expiration on January 1, 2021, in NY State affect your living situation?” 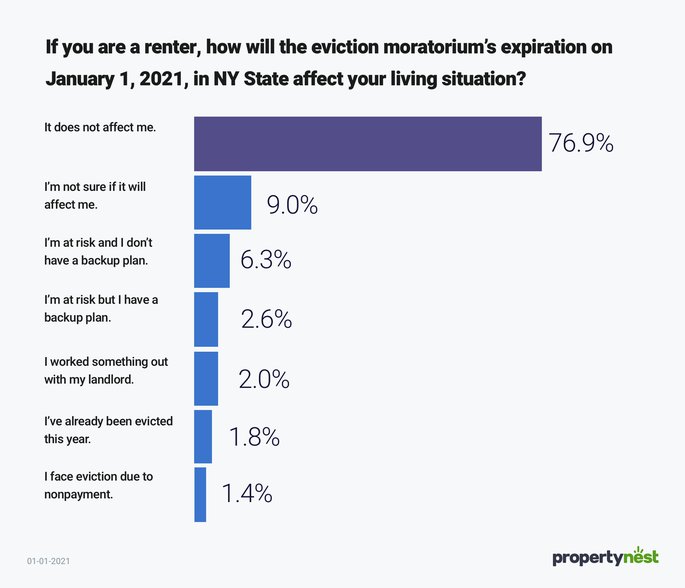 The fact that 9.1% of respondents were not sure if they could be evicted or not shows that there is a significant number of renters who have been facing difficulty making rent during the pandemic. Even more troubling is the number of respondents who had no backup plan if evicted.

With roughly 5.4 million renters in New York City alone, those at risk with no backup plan potentially translates to 340,000 renters just in the city. The 23.2% of respondents who may have had trouble paying their rent this year would mean over 1.25 million renters in the city who could have faced some kind of hardship.

Despite any moratoriums having expiration dates, the Tenant Safe Harbor Ave passed this year protects tenants who’ve faced rent hardship due to income loss during the pandemic from eviction, with no expiration date in place. However, the onus is on the tenants to actually respond to the notice of petition for eviction, and provide documentation proving their financial hardship.

The new measures passed by the State Senate on the 28th of December, would make it easier for tenants by allowing them to simply provide a signed affidavit declaring financial difficulty in paying rent due to circumstances caused by the pandemic. However, this has some landlords worried that tenants who are not facing hardship would start withholding rent and would “game” the system.

The new signed mandate also protects small landlords and elderly and disabled landlords from foreclosure. However, this does not apply to landlords with multiple properties who can still face dire financial difficulties. Loss of rent from tenants who have lost jobs is compounded by empty units that are sitting on the market far longer than usual, and commercial tenants who have gone out of business.

The Eviction Moratorium is a Temporary Fix

Unfortunately, long-term the eviction moratorium and the Tenant Safe Harbor Act do not solve any real housing or income issues for tenants or landlords. It remains to be seen what the federal or state and local governments can do to protect tenants from going homeless or from landlords going into foreclosure or bankruptcy in the long run.

Even if in the long run, landlords can evict tenants by the masses, there will be little to no chance they can recoup their losses. Moreover, mass homelessness could become a very real problem, especially if evictions eventually transpire. Getting another apartment or rental is very difficult after having an eviction officially on record.

Landlords Can Still Get Some Evictions Issued

A small number of renters were already evicted in 2020, many of whom had pending issues with their landlords pre-pandemic. While no tenant can get evicted due to job or income loss at this time, judges can still hear cases individually and make a decision for the eviction order to proceed or not.

And while most residential landlords know they have little to no power to currently evict tenants, it doesn’t stop many of them from harassing tenants with late or delinquent rent. Landlords can and some engage in the more unsavory practices of withholding repairs and maintenance to punish these renters. While these measures are not legal and cause emotional harm to already struggling renters, it can take a very long time to get them resolved through city government and courts. So, in the meantime sadly, harassment can be an effective technique to cause tenants to move out.

Read on: What to do when you are unable to pay rent for your apartment

PropertyNest conducted an online survey among New York residents how the eviction moratorium expiring could possibly affect them. 1,000 respondents ages 18 and older participated with a margin of error of +/- 1.4%.

What to Do If You Get an Eviction Notice in New York What Are New York City Tenant Rights? Survey: Number of New Yorkers Unable to Pay Rent Doubles for June Survey: 55% of New Yorkers Would Be Interested in Restaurant Subscriptions