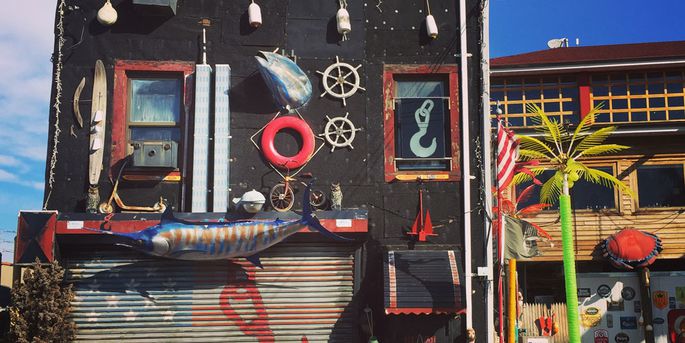 While Red Hook is known to many as being inaccessible by train, it's this very trait that gives the neighborhood is very unique feel and character.

It's also the major draw for many who find this a charming seaside town sorts with its cobblestone streets, historic buildings, and stunning waterfront views.

Get this - Red Hook is THE ONLY neighborhood in NYC that has a fully frontal view of The Statue of Liberty!

It's also the base for many of artists and local artisans which include metal and woodworkers.

IKEA and Fairway Market have been valuable neighborhood additions that have brought many [who may not have come otherwise] to explore the area.

The neighborhood also features one of the few farms in five boroughs--The Red Hook Community Farm.

The best part is that the farm sells its organic produce right back to the community at affordable prices!

FUN FACT: Red Hook is named for the red clay soil as well as the pointed peninsula into the Upper New York Bay.

Access by car is somewhat easy since the Gowanus Expressway runs through it, separating it from the rest of Brooklyn.

It is connected to Manhattan by the Brooklyn-Battery Tunnel.

IKEA also provides a complimentary shuttle service that runs to the following stops:

Services are provided Monday-Friday every half hour from 3-9 PM and weekends every 20 minutes from 11AM-9PM. Non-shoppers also use this service.

Unfortunately, the subway and bus service in Red Hook is sparse.

In recent years, there have been a number of gut renovations as well as new constructions going up in this up-and-coming neighborhood.

While Red Hook is a small community, it offers a number of public and charter school choices for its residents.

Red Hook falls within geographical district #15, so neighborhood students can apply to unzoned schools in the wider part of the district.

Besides the public and charter school selection, Red Hook is home is BASIS a private school offering rigorous academics in a state-of-the-art building.

Red Hook is continuing to expand its cuisine choices for residents.

Tradition will have you visiting one of Red Hook's longest lasting establishments - Defonte's Sandwich Shop. Since 1922 this old school Italian deli has been a destination for many.

For a delicious brunch, head over to The Good Fork and indulge in some comfort classics like fried chicken and waffles.

Fresh seafood is a staple for this waterfront neighborhood. It's only fitting for people to want to enjoy a lobster roll and cheese fries at Red Hook Lobster Pound.

For more seafood and fun, check out Brooklyn Crab, which imparts sweeping views of the harbor, killer drinks, and miniature gulf as well as other forms recreation.

While seafood may be a more natural fit, a pit-smoked BBQ joint--Hometown has made a splash, whose melting pot menu features tacos, Vietnamese wings, and Korean ribs!

Red Hook is also home to one of Brooklyn's oldest bars--Sunny's Bar, which has over 100 years of history as a watering hole.

Once a popular spot for longshoremen, you can now enjoy happy times and live bluegrass/folk music at the spot, memorialized by Anthony Bourdain on his show No Reservations.

To keep things interesting, there are all kinds of art and history events going on in the historic warehouses during the year.

You'll be able to find art exhibitions year round among its galleries like North Inuit Art Gallery, Brooklyn Waterfront Artists Coalition, and Pioneer Works to name a few.

Visitors can have a novel experience at the Waterfront Barge Museum which is actually housed in a barge right on the water!

It's not just a museum, but also a performance and event space. Hook Arts Media is the other performance arts space to check out.

Besides Sunny's, Red Hook is home to a myriad of amazing bars to visit such as Brooklyn Ice House, Seaborne, Botanica, Jalopy Tavern/Theater and Rocky Sullivans which both feature live music.

How Safe is Red Hook Neighborhood?