CITY
Learn about local Nolita Neighborhood culture, businesses, schools, homes, and parks. Find out why Nolita is one of Manhattan's hottest neighborhoods. Discover the awesome restaurants and points of interests residents of the area are enjoying. 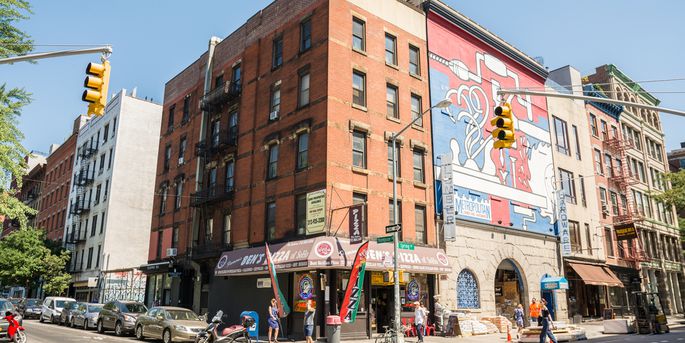 This tiny, chic neighborhood is filled with cozy cafes and some of the best food gems in the city. In relation to its placement between neighborhoods, Nolita stands for North (No..) of Little Italy (..Lita).

Not mentioned in the name is Nolita’s relation east of Soho and west of the Lower East Side.

Nolita, once home to late David Bowie, has situated itself as a unique mix of trendy Soho and the charm of Little Italy.

Street art changes weekly making the historic area a destination for millennials in search of the next best hipster selfie.

FUN FACT: In a neighborhood that's only a few blocks wide, apartments can be hard to find. Turnover rates are low because many residents know that if they leave Nolita, it might be difficult to come back.

What Celebrities Live in Nolita

Nolita, while trendy, is a very small area in Lower Manhattan so it's no wonder not too many celebrities reside here.

Though transit options are not very convenient in this area, Nolita is the nexus of three popular neighborhoods with excellent transit options - Noho, Soho, and the Lower East Side.

The 6 train will bring you straight to Spring Street and Lafayette Street.

The subways link to downtown and midtown with connections at Union Square.

Nolita has a lot of historical charm jam-packed into a small area.

If you're looking to move into this neighborhood, here are the average rental prices:

Nolita is located in District #2, which is home to one primary school. Nolita students do have access to unzoned schools in this district.

While De Salvia Playground on Mulberry Street is the only playground in the neighborhood, a playground is also available at one of the highest rated schools in the city which is PS 130 Hernando De Soto.

Because most of its students come from homes where families do not speak English, the school's above-average reading and math scores are something to be proud of.

The attendance rate is also one of the highest in the city and there is a strong emphasis on the performing arts.

Over the years, an influx of small shops began attracting a much younger, hipper demographic to the neighborhood and this includes restaurants.

Drawing a heavy influence from its neighbor Little Italy, the tiny area offers many Italian hot spots as well.

One such old-school joint is Emilio's Ballato, which still attracts A-list celebrities to its premises like Rihanna and the Obamas.

A contemporary rendition on traditional Italian can be found in newer spots like Pasquale Jones and Rubirosa.

How Safe is the Nolita Neighborhood?