Survey: 90% of Home Seekers Are Concerned About Rising Energy Prices

Written by
Ruth Shin
High energy costs could change the what kinds of homes and places buyers and renters are going to be looking for. Find out what factors and features are home seekers top choices.

Due to recent events, energy prices in nearly every category have begun to soar. Natural gas was the first to get expensive this past winter, however, electricity and gasoline have also made significant bumps in this year alone.

Experts speculate that we will only see them rise further with inflation and supply issues.

PropertyNest wanted to know if higher utility bills and steep prices at the gas pump have gotten people looking for new homes so worried that they’re making changes to what kind of place they were looking for. 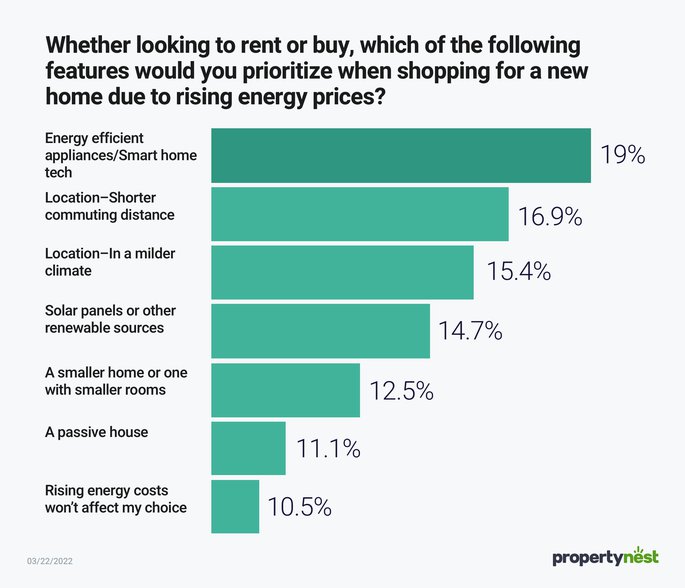 PropertyNest asked: “Whether looking to buy or rent, which of the following features will you prioritize when shopping for a new home due to rising energy prices?”

While industries are trending toward energy efficiency and green tech and design, it may be rising energy costs that actually prompt most Americans to lead greener lifestyles.

Many Americans were floored in February of this year when they received their utility bill. Gas and oil prices skyrocketed and many bills doubled or tripled. Seeing a shocking amount due can make homeowners and renters understand that it may not be a sustainable situation.

And, the worst may be yet to come. Don Whaley, President of OhmConnect Energy and someone with over 40 years of experience in the energy sector, says that consumers receiving their contract renewals, “will likely experience sticker shock when it comes to new contract pricing”.

Most people don’t really prioritize the environment when it comes to buying or renting a home. However, if it affects their pocketbook in a significant way, it can mean immediate change in behavior.

The most popular responses generally were to now seek a home with energy-efficient appliances or smart home tech, finding a home in a location with a shorter commute time, and a home in a milder climate. These three are probably the easiest solutions and allow for the most choices without sacrificing space.

Passive home design is a much newer concept than just solar panels but offers a multitude of advantages and can reduce energy consumption in your home (due to heating and cooling) by 90% when done right top to bottom. It’s so efficient most homeowners rarely need to turn on heat or cooling, while maintaining optimal air quality within the home.

Older respondents who may be retired are thinking about long-term money-saving sustainability.

What Homeowners Can Do Now to Save Energy

Erin Shine
Founder & CEO of Attainable Home
What are immediate changes consumers can make at their homes to move towards a more energy-efficient lifestyle?
It’s an investment, but consider swapping your traditional water heater with a new heat pump unit of the same size. Heat pump water heaters save about 75% energy vs. traditional ones. For my latest net-zero renovation here, the old 40-gallon water heater used $500 per year in energy, while the new Rheem heat pump unit uses only $104 per the Energy Guide label. This is also enough energy savings to power the Tesla Model 3 (EV) for an entire year, further saving $1,000+ a year on not using gas at current prices. The overall payback on this is under 3 years.

There are many minor and easy steps homeowners can take to save on their heating and cooling bills.

Eric Shine, Founder and CEO of Attainable Home, a company that renovates to create and builds net-zero or passive homes, has a few practical tips for homeowners on how they could save without major renovations such as sealing air gaps with caulk and spray foam, switching all lights and bulbs to LEDs, and if you’re willing to shell out a small investment–switching to a heat pump water heater.

His simplest and yet surprisingly effective suggestion was to change habits, “just turning off lights, setting the HVAC on more reasonable temperatures, shorter showers, buying an air fryer vs. conventional ovens, and more can really add up for energy savings.”

While home sellers or landlords can’t just change the location of their homes or make them smaller, changing appliances or upgrading your home systems to energy efficient products is an easy step to making your home far more attractive to potential buyers or renters.

Real estate developers may not feel that adding on extra cost for passive design is good for their bottom line but if consumers are more drawn to passive home or net-zero design, or new laws are passed mandating these changes.

However, if regular home buyers are feeling the pinch, they may see a slightly more expensive passive home as a great long-term and money-saving investment, especially in light of very high energy costs.

Even if the changes are not rapid, there are already signs showing the growing popularity of passive homes or net-zero design within the home-building industry itself.

PropertyNest conducted an online survey among nest seekers nationwide from March 8-10, 2022, on which energy-saving feature they will now prioritize due to rising energy costs. 1,001 respondents ages 18 and older participated with a margin of error of +/- 2.16%.