DATA
PropertyNest survey explored how Americans reacted to the condo tower collapse in Miami in relation to their own buildings. The results show that many apartment dwellers know little about structural issues in their buildings or have questioned it. Learn what the results were and what apartment hunte 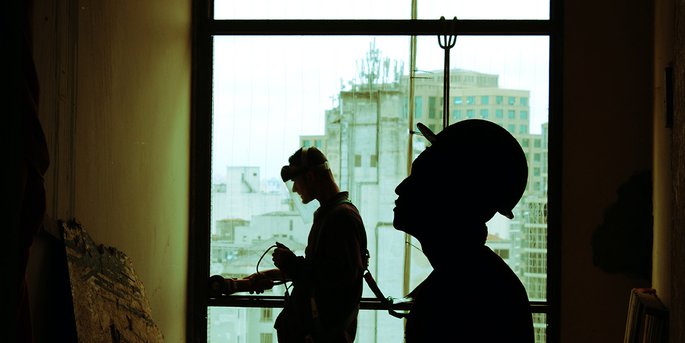 The condo building collapse at the Champlain Towers in Miami had a profound effect, not only on the people of Surfside and Miami but on the country's more than 39.7 million apartment dwellers.*

The thought that the very place that is supposed to make you feel safe--your home, could be the very instrument of your death by crumbling around you is a chilling one. And yet, very few homebuyers and renters ever question the integrity of the structures they plan on living in. They rely completely on government oversight and the hands of the condo/co-op boards and real estate developers. Building stability could be a widespread issue that most are not even aware of.

PropertyNest wanted to know how apartment dwellers across the country think about the structural integrity of their buildings now and whether the recent events in Miami sparked any concerns and inquiries over their dwelling. 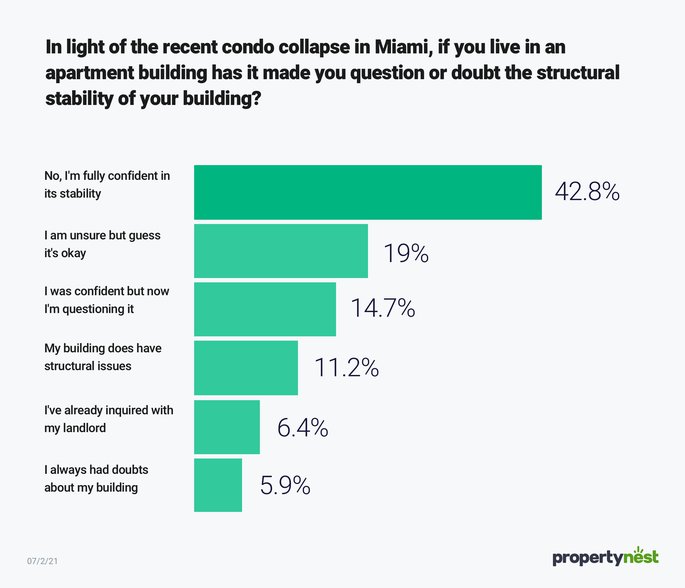 “In light of the recent condo collapse in Miami, if you live in an apartment building has it made you question or doubt the structural stability of your building?”

Survey results showed that structural issues are a concern nationwide. If you consider that only 42% felt fully confident, it translates to 57% not feeling fully confident and having doubts about the structural integrity of their buildings.

Over 11% of our survey respondents said that their buildings currently have structural issues, which translates to nearly 4.5 million people across the United States. Lack of oversight of building regulations and security protocols could potentially be a more widespread problem. And, existing building regulations may not be sufficient to protect homeowners and renters.

What The Collapse Means for Building Regulations and Construction

Many of Miami’s and Surfside’s regulations and oversight were seriously called into question--from both the city and the condo board. Negligence and old ordinances likely played major roles in the eventual collapse of the Champlain Towers.

The condo board knew about the structural issues and even hired an engineer to look at the issues in detail and investigate the cost and mitigation required. Numerous city inspectors were in the building over the course of any given year to examine potential renovation violations within the individual units. The reality is that no inaction by the condo board or the inspectors that visited the building over the years was actually illegal.

Currently, building inspection reviews vary from municipality to municipality. Some cities are more proactive than others but there are no uniform regulations on the Federal level to mandate safety inspections.

This incident might spark cities around the country to start reexamining their building codes, inspections, and violations. It also might force builders and engineers to rethink the actual construction of buildings by producing new standards and methods of building. As it stands, mostly new buildings in flood-prone areas are required to undergo more frequent inspections.

“In the past decade, requests for building code and fire-safety inspections have increased more than 50 percent in 45 out of the 50 states. These requests are often prompted by owners who want to know why their houses sustained damage after a natural disaster or by homebuyers who want to make sure that they don't purchase a damaged property,” says Joshua Haley, Founder of Moving Astute.

Based on the survey results, we expect more renters and homeowners to follow suit and put pressure on municipalities to reexamine their building codes, enforce inspections; and fine violations. The concern about structural integrity may also prompt builders and engineers to rethink the actual construction of buildings by producing new standards and methods of building.

No doubt, the insurance payouts for the residents and board of the Champlain Towers were tremendous in scale--comparable destruction from a major natural disaster.

It might make insurance companies reshape their policies for building and condo insurance; even renters insurance. In this case, it would influence not only rates but payout limits, deductibles, and other stipulations, or even require inspections or submission of inspection reports.

How Buyers, Renters, and Apartment Dwellers Can Protect Themselves

Americans looking to buy or rent in an apartment dwelling can take immediate steps to ensure that their new home is safe.

First, Speak to the Landlord, Co-op/Condo Board, or Building Management.

Many experts agree that the average person should ask when the last inspections were, or if there were any recent assessments. It’s also important to ask about any future assessments.

Volodymyr Barabakh, co-founder of Fortress Home recommends looking for early signs of structural integrity issues. These can be caused by flooding. “One of the biggest causes of structural issues is a history of flooding, so find out if the building was flooded before you moved in. If it was, then you should find out what the cause of the flood was, and if the building is at risk of future flooding, then what measures are being put in place to protect from this in the future,” advises Barabakh.

It’s important for potential buyers to not forgo this process and also to secure an inspection prior to purchase no matter what stipulations sellers are putting in place. If a seller is not willing to allow potential buyers to conduct inspections, then it might be best to look for alternatives as you have no idea what is lurking beyond fancy finishes and appliances. It could mean not only expensive repairs and replacements but your own family’s safety as well.

Another important fact to consider when purchasing or renting in a building is which structures are more likely to collapse. “63% of all building failures involve low-rise buildings,” states Andrea Boyd, the Community Director of Tailored Space. “Before investing, people [should] make sure they get a structural audit so they can demonstrate effective stewardship.”

There are a few different reasons a building’s structure could be compromised. Haley says this can “include water damage due to flooding and termites”. While flooding would be the most damaging and extreme example of water damage, even leaks into old mortar joints can do significant damage.

Barabakh notes that, “noticing early signs of structural integrity issues and (crucially) not ignoring them” is paramount and that “[t]he most common one of these is house settling."

Experts agree that there are some classic signs that the building in question might have some serious issues that need mitigation. And, you don’t need to be a construction expert in order to notice some of them.

Among the most common telltale signs that the average person can discern are cracks or bulges in the interior and exterior walls, ceiling, or foundation, soil pulling away from the building or house, a damaged chimney, and sagging roofs or floors.

“Windows and doors usually start showing structural flaws earlier than any other part of the house,” the founder of Tools’N’Goods, Sean Chapman points out. “Hire an inspector if you notice uneven door gaps, problems with door/window opening and closing, doors may open without any reason, or doors and window sills separating from the wall.”

Ezra Laniado of Landmark Construction Crew offers an insightful tip. “Sometimes unlevel floors are most noticeable under doors. [I]f it's cracked or crooked, check your foundation and footings. "

Learn About How Climate Change May Be Affecting the Area

Taking the environment and climate in your neighborhood into consideration is as important as researching the best schools in the area or neighborhood safety. Environmental factors could mean you might be looking at houses in an area that’s prone to flooding, forest fires, strong wind storms, mudslides, earthquakes, high heat, or other extreme weather.

Even a simple fact like how the house or building may be in a wetter climate might mean potential damage over the years to a structure, making buildings in the area more susceptible to instability.

PropertyNest conducted a national online survey on if the news of the Miami condo collapse affected their confidence in their own building’s stability from July 5 to July 25, 2021. 1,000 respondents ages 18 and older participated with a margin of error of +/- 2.1%. 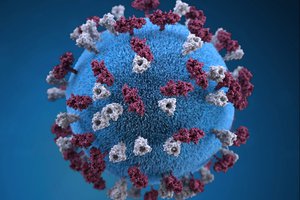 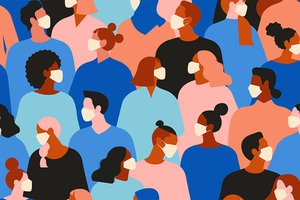 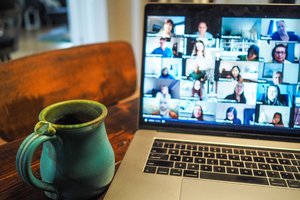