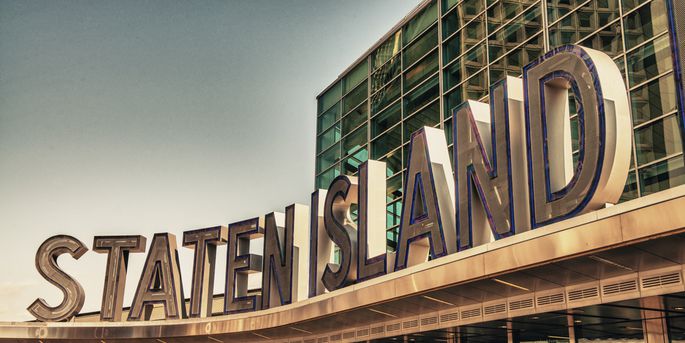 Located on the northeastern tip of Staten Island, St. George is bordered by Tompkinsville to the south and the neighborhood of New Brighton to the west.

Possibly due to its convenient placement right off the Staten Island Ferry Terminal, St. George remains the most densely developed neighborhood on Staten Island.

Victorian, Colonial and Tudor-style homes populate the historic district of the St. George neighborhood but there are many apartments situated right along the waterfront with fabulous views of the harbor and NYC.

The opening of the Empire Outlets in the summer of 2019, has basically transformed the landscape of the neighborhood.

The new level of foot traffic is unrecognizable for St.George. The Empire Outlets not only offer popular brand name shops, but a number of dining options (including a Shake Shack!), and soon-to-be added 190-room hotel.

The St. George Theater is a landmarked spot popular for hosting performances, film and television shoots, concerts and educational programs.

FUN FACT:The Verrazano-Narrows Bridge, also known as the starting point for the New York City marathon, claimed three lives during its construction in 1964.

The Verrazano-Narrows Bridge is the longest bridge in the country and connects Staten Island to Brooklyn.

Staten Island is the only borough not connected to New York City by the subway, so it looks like the ferry or bus will have to do for all of those non-car owners out there.

The vast majority of housing available in St. George is going to be rentals/condos/coops units in large apartment building complexes.

There are, however, standalone houses available for rent and sale in the area.

If you're looking to move, while the average rent prices don't seem as cost-effective, take into consideration that these are usually large apartments and some of them full houses.

The number of options one has for dining has exploded in the area in recent times, offering residents choices that range from Mexican, to Thai, seafood, Indian, etc.

Coles Dockside Restaraunt will make you feel like you are on a tropical island, not Staten Island.

Enjoy marina views, yummy cocktails and a wide selection of delicious seafood in a relaxed environment for lunch or dinner.

For a casual updated version of Italian, visit Pier 76 and Marie's 2.

Cozy up at Beso, a small Spanish tapas restaurant along the waterfront. Patrons will be sure to enjoy great music, a relaxed atmosphere, and food bursting with flavor.

Seat yourself right by the harbor at the River Dock Cafe, which is right on the Terminal, and enjoy some fresh raw oysters and a myriad of incredible seafood options.

With the Staten Island Ferry being right in the neighborhood, if you're craving something more upscale Manhattan's great restaurants are a quick ride away.

All Staten Island schools fall under District #31, which means there are a lot of really great schools to offer Staten Island residents.

Staten Island Technical School is ranked #2 out of all NYC schools.

How Safe is the St. George Neighborhood?