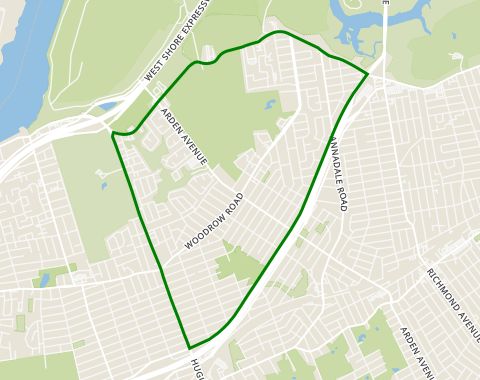 Arden Heights is the name given to the western end of Annadale. More than just a colloquialism, the name appears on most maps of NYC. The neighborhood benefited from development in the 1970s with the opening of Village Greens, New York City's first planned urban development. Village Greens has a 16-acre park and two Olympic-sized swimming pools. The project was completed alongside a shopping center meant to service the newfound residents. One highlight of the region is Arden Heights Woods, the largest protected wetlands in New York City. Therein, one will find forested hardwood swamp alongside several ponds connected by streams and creeks. The wetlands provide the area with natural flood-control! Although serviced by several bus routes, Arden Heights does not have its own stop on the Staten Island Railway. The nearby, however, Annadale Station can be reached by bus. The community has a large Jewish and Italian population, although a growing Asian and Hispanic population exists as well.

These are the average rental prices in Arden Heights by apartment size. To find out how much you need to earn in order to qualify for these prices, go to our salary calculator.

These trains run through Arden Heights. In addition, city buses are also available in this area.

No subway lines in Arden Heights