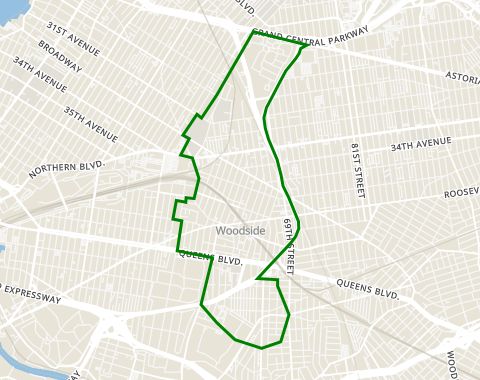 Woodside is a large residential and commercial neighborhood in the Western portion of Queens, bordered by Maspeth, Astoria, Sunnyside, Elmhurst, and Jackson Heights. Woodside is a part of a very old-school New York, with the diversity and element of surprise one can expect from Queens. Walking down Roosevelt Avenue, one will hear five or six different languages, see an Irish pub, a Punjabi restaurant and a giant megastore all within the same block. On side streets, classic Queens row houses dominate, but one may also encounter Hindu temples and mom-and-pop/foodie-lauded ethnic restaurants. Woodside is home to several substantial parks, public school districts, all the shopping one could ever need and a very convenient Manhattan commute along with the 7.

These are the average rental prices in Woodside by apartment size. To find out how much you need to earn in order to qualify for these prices, go to our salary calculator.

These trains run through Woodside. In addition, city buses are also available in this area.