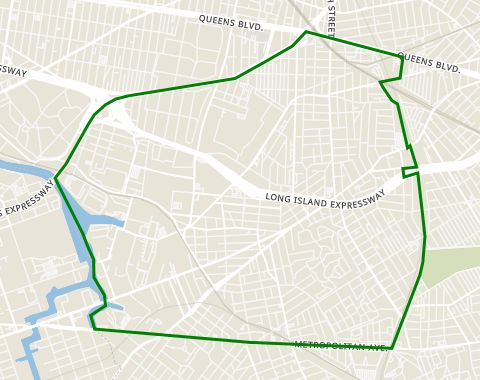 Maspeth is a large territory to the south of Queens, bordering the Brooklyn neighborhood of East Williamsburg. Despite its close proximity to East Williamsburg, Bushwick, and Ridgewood (which is a lot like its Brooklyn neighbor), Maspeth couldn't be further from a Brooklyn vibe. You would liken Maspeth to living in a small old school town within New York City. The only reminders you're still in the city is the I-495 running through the neighborhood and the BQE running along the norther border. The majority of residents are of Polish, Irish, and Italian descent, which is reflected in the businesses and shop operating in the area. However, in recent years many other ethnic groups have moved and continue to move into the neighborhood contributing to its diversity. Most of the housing are low-rise buildings, single and two-family houses, and rowhouses and prices are significantly more reasonable than nearby neighborhoods like Ridgewood, Bushwick, and East Williamsburg. No mass transit trains actually run into the neighborhood and buses only cover a few routes in this massive territory, so driving is a must for getting around.

These are the average rental prices in Maspeth by apartment size. To find out how much you need to earn in order to qualify for these prices, go to our salary calculator.

These trains run through Maspeth. In addition, city buses are also available in this area.

No subway lines in Maspeth