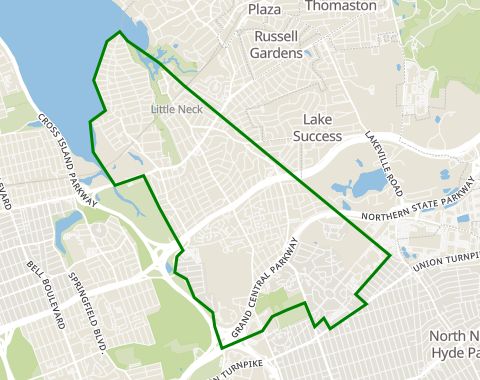 Douglaston is on the North Shore of Long Island, with Nassau County to the east and Bayside to the west. As of 2015, Douglaston had a population of roughly 16,000 living mostly in single-family homes. Residents get to enjoy plenty of greenery, over a mile of waterfront, and highly-praised public school. People who move intend not to move out. At peak hours, the commute to New York Penn Station by the Long Island Rail Road's Port Washington line is said to take 30 minutes, and the community is close to major parkways. Little Neck is to the east of the Marathon Parkway and the neighboring community of Douglaston. In fact, Douglaston and Little Neck are often thought of as two halves of the same neighborhood, with the Marathon Parkway serving as the line of demarcation. Little Neck is yet another Queens neighborhood that provides suburban stability without sacrificing urban access. You get solid schools, housing options, and enough eateries to stay satiated when you don't want to make the excursion to Manhattan. It’s worth noting, though, that the commute to Manhattan is only half an hour on the Long Island Rail Road. Middle-class professionals are the largest demographic in Little Neck, often living in single-family homes. Although, some have taken to building larger homes that, at times, are not in line with existing aesthetics. Residents of and visitors to Little Neck can enjoy Udalls Cove Park Preserve, 34 acres of wetlands and forested areas

These are the average rental prices in Douglaston-Little Neck by apartment size. To find out how much you need to earn in order to qualify for these prices, go to our salary calculator.

These trains run through Douglaston-Little Neck. In addition, city buses are also available in this area.

No subway lines in Douglaston-Little Neck