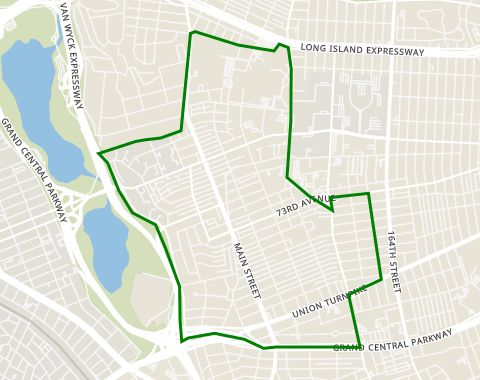 Kew Gardens Hills is a middle-class, residential neighborhood located in Queens. It is bordered by Forest Hills to the west and Hillcrest to the east. It is located a short distance from multiple highways including Grand Central Parkway, Van Wyck Expressway, Long Island Expressway, and Jackie Robinson Parkway. There are multiple active religious groups and buildings in the area, with many of them being Jewish due to the high Jewish population. The main commercial roads in the area include Main Street, Union Turnpike, Parsons Boulevard, and Kissena Boulevard. Housing consists of single-family homes – both detached or in rows – and three to six-story pre-war garden apartment buildings. Notable residents have included musician Bob Dylan and singer Paul Simon.

These are the average rental prices in Kew Gardens Hills by apartment size. To find out how much you need to earn in order to qualify for these prices, go to our salary calculator.

These trains run through Kew Gardens Hills. In addition, city buses are also available in this area.