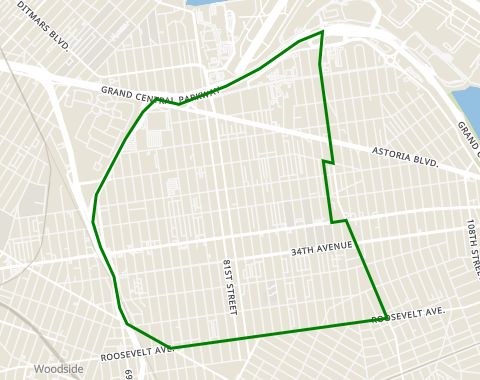 Jackson Heights is a culturally-rich neighborhood located in the northwestern portion of Queens. It is one of the most diverse neighborhoods in the entire nation with a charming mix of cultures – including but not limited to – Indians, Nepalese, Bangladeshis, Tibetans and Latin Americans. About half of the neighborhood was designated as a historic district. Housing is an interesting assortment of architectural beauty and consists of many prewar gems like taller apartment buildings built in French Renaissance, Tudor and Romanesque styles as well as smaller multi-family dwellings with private courtyard gardens. Travers Park is the local favorite and includes a playground, athletic fields, basketball and tennis courts.

These are the average rental prices in Jackson Heights by apartment size. To find out how much you need to earn in order to qualify for these prices, go to our salary calculator.

These trains run through Jackson Heights. In addition, city buses are also available in this area.