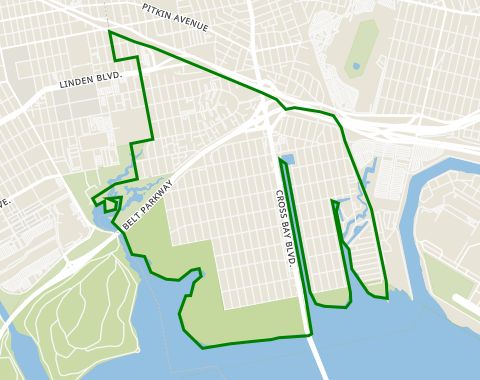 Howard Beach is a suburban neighborhood located in the southwest portion of Queens. Housing consists of mostly low-rise single and multi-family houses. It is known by many for the Airtrain station that connects it to JFK Airport, which is located nearby. Howard Beach is composed of numerous smaller neighborhoods which include: Hamilton Beach, Howard Park, Lindenwood, Rockwood Park, Spring Park, Ramblersville and Old Howard Beach. The main commercial thoroughfare is Cross Bay Boulevard. Charles Memorial Park is a local favorite. It sits on Jamaica Bay and includes a beach as well as athletic fields and tennis courts. One of its most notable former residents was Gambino crime family head, John Gotti.

These are the average rental prices in Howard Beach by apartment size. To find out how much you need to earn in order to qualify for these prices, go to our salary calculator.

These trains run through Howard Beach. In addition, city buses are also available in this area.