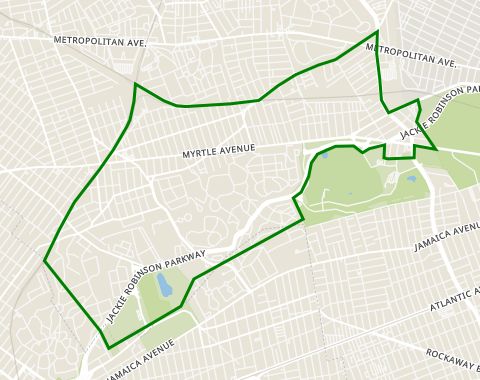 Glendale is located in the west-central portion of Queens between Ridgewood to the west and Forest Hills and Kew Gardens to the east. Though most of the housing in the area consists of apartment buildings, semi-detached townhomes and wood-framed houses with private driveways and backyards, the architecture style depends on which section of the community you live in – Upper Glendale, Middle Glendale or Lower Glendale. For shopping, the Shops at Atlas Park is the neighborhood mall which includes a movie theater, shops and restaurants. Soon after the state of New York outlawed any more cemeteries to be built in Manhattan in 1847, Glendale became surrounded with them and known as the “Cemetery Belt.” Notable residents have included magician Harry Houdini and former New York Yankee Phil Rizzuto.

These are the average rental prices in Glendale by apartment size. To find out how much you need to earn in order to qualify for these prices, go to our salary calculator.

These trains run through Glendale. In addition, city buses are also available in this area.

No subway lines in Glendale