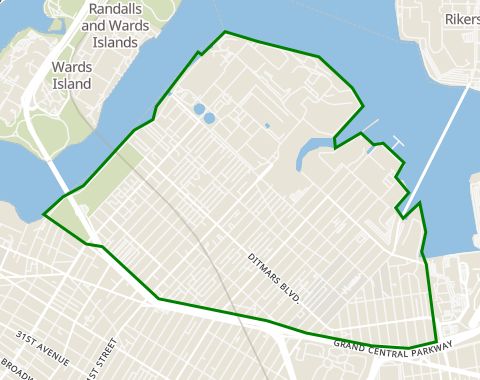 Stretching from Astoria Park along the East River to La Guardia Airport and from Bowery Bay to Grand Central Parkway, Ditmars-Steinway is a small, highly diverse enclave of North Eastern Queens. The neighborhood shares in nearby Astoria’s heavily Greek population, and boasts a number of Old World Greek supermarkets and restaurants. Public schools in the area, which are reportedly high quality, record 118 nationalities. Despite a recent influx of “yuppies,” the neighborhood still feels old-school New York, with plenty of delis and down to earth bars. In the nicer months, locals flock to the gigantic Bohemian Beer Garden and the rolling hillsides of Astoria Park and its landmark 1936 pool. With five power plants, the neighborhood also provides about 75% of the city’s electricity. It’s also a quick 20-minute commute along with the N or W to midtown Manhattan.

These are the average rental prices in Ditmars Steinway by apartment size. To find out how much you need to earn in order to qualify for these prices, go to our salary calculator.

These trains run through Ditmars Steinway. In addition, city buses are also available in this area.