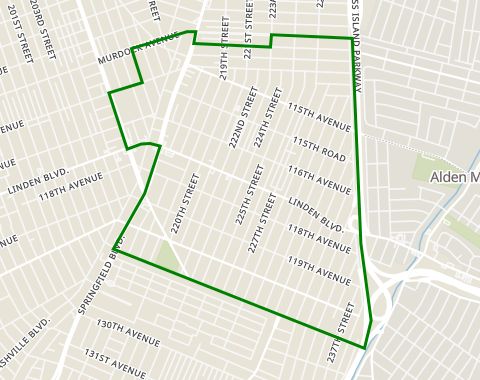 Cambria Heights is a neighborhood in Queens north of JFK airport. It's right on the eastern border of Queens, opposite of Elmont, Long Island. Cambria Heights is you classic suburban Queens neighborhood complete with the usual red brick rowhouses, single-family homes, and driveways. Home ownership is far more common in this faraway neighborhood than rentals. The average single-family home goes for well under a million. Try closer to the half a million mark. The price one pays for an inexpensive sizable house and the tranquil residential vibe is the far commute to the city. It's no easy task even by car. Firstly, neither the MTA trains nor the LIRR stops anywhere reasonably close to Cambria Heights. Secondly, even by car, one would need to get on the Cross Island Parkway to get to a major road like the Belt Parkway or the Grand Central Parkway to put you in the direction of the city. Linden Boulevard provides all the retail necessities for the neighborhood. Cambria Height basically is one of the neighborhoods you can escape to get as far away from the city as you can without actually leaving it.

These are the average rental prices in Cambria Heights by apartment size. To find out how much you need to earn in order to qualify for these prices, go to our salary calculator.

These trains run through Cambria Heights. In addition, city buses are also available in this area.

No subway lines in Cambria Heights