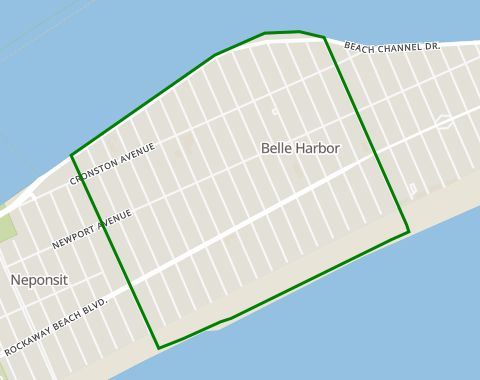 Belle Harbor is a closely-knit, well to do neighborhood between Beach 126th and Beach 141st Streets on the western half of the Rockaway Peninsula. It’s only 4 blocks wide and 15 blocks long, every inch of which is walking distance away from the beach. And from May to September, with no parking allowed, Belle Harbor truly feels like a beach community. There are many single-family homes in the neighborhood, with a sizable population of third and even fourth generation affluent Irish Catholic residents. There are also notable Italian American and Jewish populations in Belle Harbor, as well as many retired and active New York City firefighters and police officers. In 2012, The NY Daily News identified the street between Beach 145th and Beach 146th Sts. as the most expensive street in Queens, with the median cost for homes being $2.5 million. That same year, Belle Harbor suffered tremendous devastation at the hands of Hurricane Sandy in 2012. Since then, the community has been rebuilt.

These are the average rental prices in Belle Harbor by apartment size. To find out how much you need to earn in order to qualify for these prices, go to our salary calculator.

These trains run through Belle Harbor. In addition, city buses are also available in this area.

No subway lines in Belle Harbor