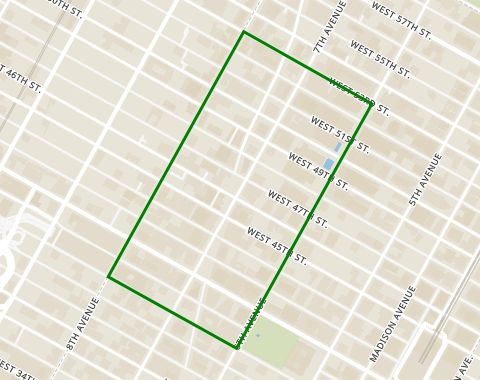 For out-of-towners and those hoping to break into show biz, New York's Theater District is Mecca. Between West 40th and West 54 Street, and Sixth and Eighth Avenue, you’ll find the not-so-hidden jewels of theater. Landmark stages attract world-class talent and worldwide travelers. Bright marquees illuminate busy streets crowded with eager audience members and autograph hounds. Restaurants, hotels, trinket shops, and attractions such as Madame Tussauds Wax Museum and the M&M Store provide ample entertainment between shows, as do costume-clad performers offering photo opportunities to eager gawkers. Ample subway lines and transportation hubs like the Port Authority and Grand Central Station make this a highly accessible area. Nearby, Theatre Row, between 9th and 11th Avenue on 42nd Street, provides up-and-coming talent venues at Off-Broadway and Off-Off-Broadway theaters. As one can expect, rent is high and only increases the closer one gets to Central Park South.

These are the average rental prices in Theater District by apartment size. To find out how much you need to earn in order to qualify for these prices, go to our salary calculator.

These trains run through Theater District. In addition, city buses are also available in this area.