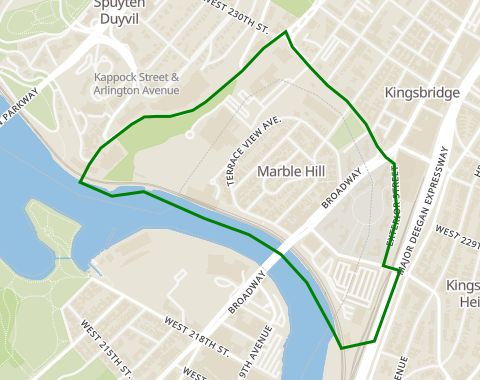 Many think that crossing the 225th Street Bridge lands you in the Bronx. In reality, you enter Marble Hill, a neighborhood that's a part of Manhattan with a peculiar history that explains why it’s part of one borough rather than the other. Marble Hill is called such because of the abundance of underground marble deposits discovered there in 1891. Just four years later, the hill became an island after the construction of the Harlem Ship Canal imposed a separation. In 1914, however, the Harlem River was filled in the north of Marble Hill, which connected it to the Bronx. So while Marble Hill may be a “part of the” Bronx, have a Bronx area code, and be patrolled by the Bronx’s 50th Precinct, it’s still Manhattan (MH is where residents find their political representatives and serve jury duty). The neighborhood is accessible by Metro-North's Hudson Line and the 1 train has a station at 225th Street. As reported by the New York Times in 1995, Marble Hill had 4,000 households, 135 of which were private homes. But when discussing Manhattan, every private home, especially one with a lawn and porch on a tree-lined street, is a true rarity. The community is overwhelmingly Hispanic and Latino, so don’t be surprised to hear salsa music and dancing on the streets on a warm summer night!

These are the average rental prices in Marble Hill by apartment size. To find out how much you need to earn in order to qualify for these prices, go to our salary calculator.

These trains run through Marble Hill. In addition, city buses are also available in this area.