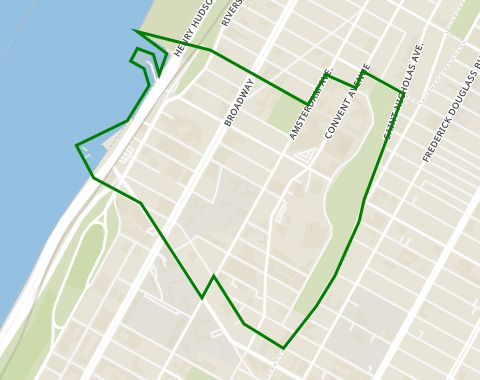 Manhattanville, also known as West Harlem, is a working-class neighborhood located in the northwest portion of Manhattan. It is bordered on the north by 135th Street and on the south by 122nd Street. It also borders the Hudson River on its west. Recently, Columbia University has expanded its campus into the area leading to increased gentrification with an increase of students and young professionals. There are many distinguished religious institutions, theaters and historically-rich architectural structures in the community. Housing mostly consists of prewar brownstones and co-ops as well as post-war condos. Relaxing waterfront at the West Harlem Piers is a popular outdoor activity in the community.

These are the average rental prices in Manhattanville by apartment size. To find out how much you need to earn in order to qualify for these prices, go to our salary calculator.

These trains run through Manhattanville. In addition, city buses are also available in this area.