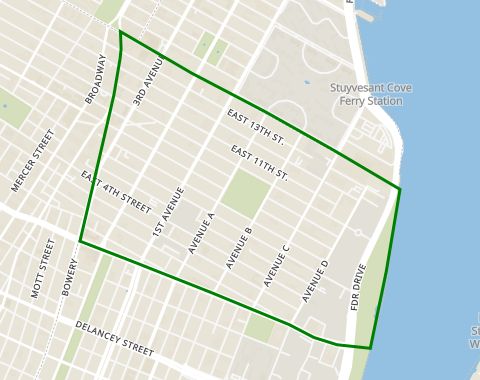 In the city that never sleeps, the East Village really commits to pulling all-nighters. Situated between 14th Street to the north, Houston to the south, and east of The Bowery and Third Avenue, the East Village began as a hub for Russian, Ukrainian, and Jewish immigrants. In the 50s, the arrival of Beatniks set the stage the hippies, musicians, and artists that moved in during the 60s. The counterculture community flourished and birthed such artistic movements as punk music and Nuyorican literature (a portmanteau of New York and Puerto Rican). Now defunct venues such as the Electric Circus, The Fillmore East, and CBGB attracted bands such as The Grateful Dead, Pink Floyd, Madonna, and Blondie, solidifying the neighborhood as a bastion of the hip. By that point, the term “East Village” became common parlance to distinguish the area from the slums of the Lower East Side. Nearly 60 years later, and the neighborhood is still home to a bustling nightlife full of culinary delights, vintage clothing stores, bars, performance, and karaoke. High rises continue to evade the area, but the pre-war walks ups have begun to mix with contemporary housing styles. The neighborhood, while undergoing changes, continues to maintain the adventurous and independent spirit that made it so popular in the first place.

These are the average rental prices in East Village by apartment size. To find out how much you need to earn in order to qualify for these prices, go to our salary calculator.

These trains run through East Village. In addition, city buses are also available in this area.