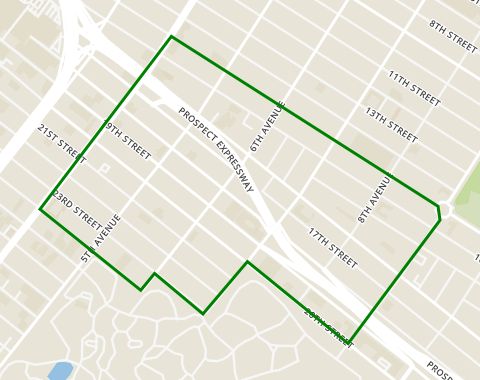 Once considered a part of South Park Slope, South Slope's distinct personality has been most prominently recognized by The New York Times Real Estate listings. The NYT sets 9th Street, the Prospect Expressway, Fourth Avenue, and Prospect PArk West and 8th Avenue as its boundaries (although some say 15th Street and 24th Street). The neighborhood is predominantly pre-war row houses, punctuated by more recently constructed high-density developments along inner blocks along 4th ave. The area has its fair share of eateries and shops. And while it may not have big, lush greenery, South Slope does have a few hidden garden gems in the form of a Butterfly Garden, Greenwood Cemetery, and 6/15 Green, a community garden that's open to the public. There’s ample opportunity for both nightlife and domestication in South Slope, which is exemplified by Greenwood Park, a beer garden that serves as a family-friendly nook before 7 and party grounds afterward.

These are the average rental prices in South Slope by apartment size. To find out how much you need to earn in order to qualify for these prices, go to our salary calculator.

These trains run through South Slope. In addition, city buses are also available in this area.