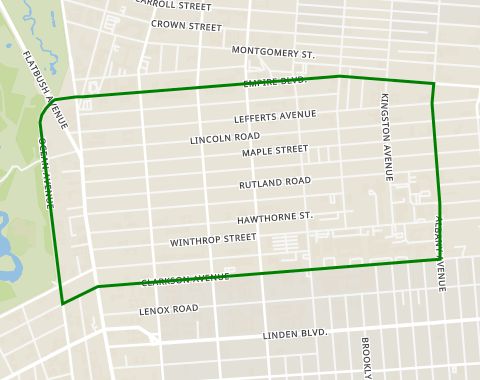 Designated an NYC Landmark area in 1979, Prospect Lefferts garden is a residential neighborhood in Flatbush that's largely Caribbean-American and African-American. Bordered by Empire Boulevard, Clarkson Avenue, New York Avenue, and Oceanside Avenue and Prospect Park. The area is home to many one and two-family units built in the early 20th century, plus plenty of larger apartment houses. Depending on where you live, the area is serviced by the B, Q, S, 2, and 5 lines ( as well as many bus routes), which means Prospect Lefferts Gardens (PLG) is easily accessible from the rest of the city. Plenty of tree and shrub lined streets, along with flourishing businesses, provide ample opportunity for residents and visitors to leisurely appreciate the neighborhood (and for those craving even more nature and walking, the area is home to the Brooklyn Botanical Gardens). As with much of the city, however, the Prospect-Lefferts Gardens is experiencing gentrification, which means that the community is undergoing a visible transformation. Whatever the future may hold, one this is is unlikely to change: PLG will remain in demand.

These are the average rental prices in Prospect-Lefferts Gardens by apartment size. To find out how much you need to earn in order to qualify for these prices, go to our salary calculator.

These trains run through Prospect-Lefferts Gardens. In addition, city buses are also available in this area.