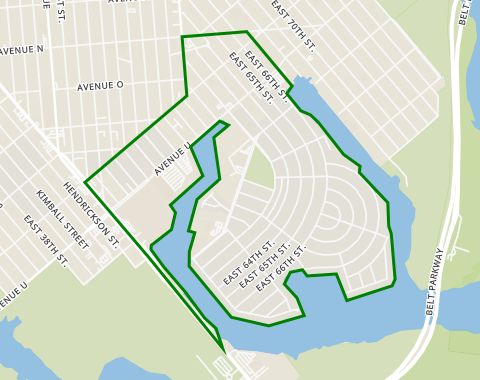 Mill Basin is a neighborhood located on a peninsula in the southeastern portion of Brooklyn next to Jamaica Bay. It borders Bergen Beach, Marine Park and Flatlands. It was originally an island, appropriately name Mill Island, until 1890. Many waterfront luxurious one and two-story brick houses as well as custom-built mansions take up most of this community. For shopping, residents head to the western side to the Kings Plaza shopping mall which is the largest indoor shopping center in Brooklyn. There are many parks around the area but the most popular one is Lindower Park, which contains a playground, ball fields and courts. Notable residents include comedian Jimmy Kimmel.

These are the average rental prices in Mill Basin by apartment size. To find out how much you need to earn in order to qualify for these prices, go to our salary calculator.

These trains run through Mill Basin. In addition, city buses are also available in this area.

No subway lines in Mill Basin