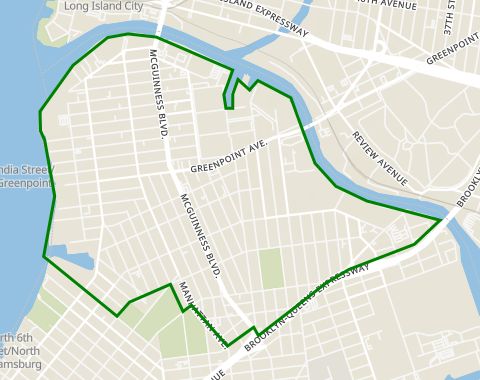 Located between Williamsburg and Long Island City lies the quickly gentrifying industrial neighborhood of Greenpoint. It is the northernmost community in Brooklyn. Outdoor activities are mostly conducted in McCarren Park which boast a dog park, running track and softball fields. McGuiness Boulevard divides the neighborhood in two. Due to the large amount of space and infrequent foot traffic, Greenpoint is a very popular filming location. Some of the more popular shows include Girls, Law and Order and Homeland. A large reason the area is less populated than other parts of Brooklyn is because of the lack of accessibility – the G line only. Some of the areas notable restaurants include: a cozy Australian Tavern appropriately named Northern Territory, Polish fare at Pyza or Karczma and cheap dessert sweets at Peter Pan Donut and Pastry Shop.

These are the average rental prices in Greenpoint by apartment size. To find out how much you need to earn in order to qualify for these prices, go to our salary calculator.

These trains run through Greenpoint. In addition, city buses are also available in this area.