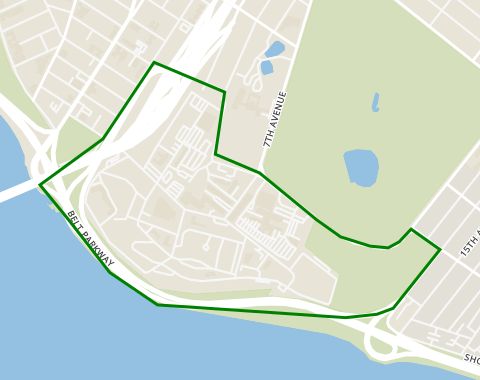 On the southern tip of Bay Ridge, you'll find a square-mile-sized neighborhood that outsiders call “Fort Hamilton” on account of a nearby army installation. Whether or not all the residents refer to the area as “Fort Hamilton” remains unclear. What is clear, however, is that the area provides all the shops and dining options necessary to keep residents happy. That plays a large part in why, as reported by the New York Times in 2013, Fort Hamilton is considered a naturally occurring retirement community (NORC). So few of the residents moved away from that, at the time, a third of the residents were over 55 years old, the fastest growing group in the area! A bike path runs along nearby waters, providing beautiful views of the sunset and the Verrazano Bridge. There's also Shore Park, where one can play baseball, tennis, or just run with a pup. The R train has its last (or first) stop at 95th Street, which means residents will be able to have a seat for their commute northward.

These are the average rental prices in Fort Hamilton by apartment size. To find out how much you need to earn in order to qualify for these prices, go to our salary calculator.

These trains run through Fort Hamilton. In addition, city buses are also available in this area.

No subway lines in Fort Hamilton