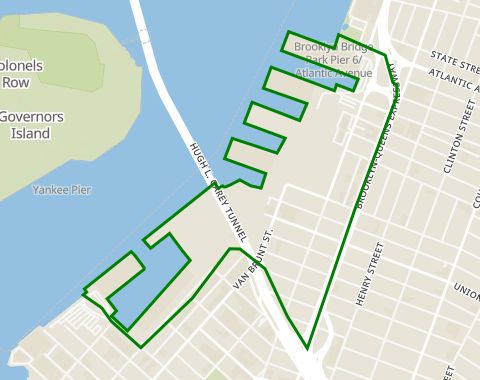 Columbia Street Waterfront District is one of Brooklyn’s smallest neighborhoods spanning only 22 blocks. Many people confuse it with Carroll Gardens or Cobble Hill, its two adjacent neighborhoods. This waterfront neighborhood suffered a setback in 1975 when a sewer line accident forced 33 building to be demolished. New development plans converted former factories and industrial buildings into mostly low-rise housing. Many residents and businesses left for other areas. Unlike Brooklyn Heights, the actual waterfront area is not accessible to the public, as it is blocked by cranes and shipping containers. Interestingly, it is boasts one of the highest percentage of same-sex couples in New York City.

These are the average rental prices in Columbia Street Waterfront District by apartment size. To find out how much you need to earn in order to qualify for these prices, go to our salary calculator.

These trains run through Columbia Street Waterfront District. In addition, city buses are also available in this area.