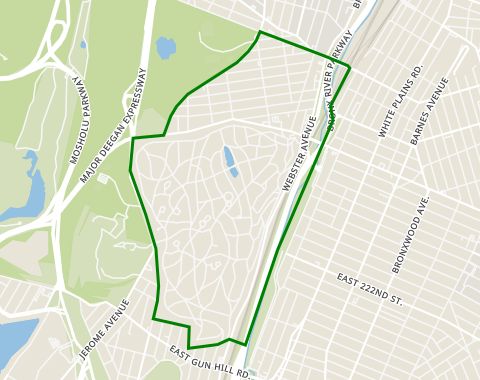 Woodlawn is a historically Irish-American working-class enclave in the very north end of the Bronx bound by Mclean Avenue to the north and the Bronx River to the east and Woodlawn cemetery to the south. Katonah Avenue, which runs through the heart of Woodlawn, is a popular destination for its many Irish bars and restaurants and other European specialty shops. The neighborhood has several old picturesque churches and spacious parks, including Van Cortlandt Park to the west. It is serviced by the 4 train and numerous buses. The majority of residents have lived in Woodlawn for generations, giving it a familiar, friendly atmosphere.

These are the average rental prices in Woodlawn by apartment size. To find out how much you need to earn in order to qualify for these prices, go to our salary calculator.

These trains run through Woodlawn. In addition, city buses are also available in this area.

No subway lines in Woodlawn