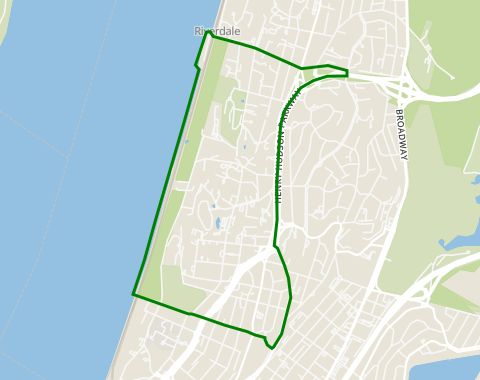 Riverdale, one of the better known neighborhoods in the Bronx, is situated just north of Spuyten Duyvil. Riverdale can be characterized as heavily residential, save for a number of businesses and restaurants on the southern end. The majority of the neighborhood can be characterized as suburban or even rustic, with single family homes and trees and greenery everywhere, with the exception of the southern border which consists predominantly of mid-rise apartment buildings and co-ops. Riverdale features the Delafields Estates, a private gated community that's 70% preserved nature, and Wave Hill Garden, a waterfront public park and gardens. Wave Hill is one of the city's best kept secrets-an extremely green space with sweeping views of the Hudson River, paired with exquisite gardens and a historic house. Riverdale's subneighborhoods are Fieldston and North Riverdale. All with an ambience that's more in line with Westchester County than New York City. Riverdale, once only accessible to the extremely wealthy, has a lot of options for those priced out of Manhattan and Brooklyn, and yet is probably the most unaffordable area of the Bronx. You can get here by bus or MetroNorth Rail as far as transportation goes outside of getting in a car.

These are the average rental prices in Riverdale by apartment size. To find out how much you need to earn in order to qualify for these prices, go to our salary calculator.

These trains run through Riverdale. In addition, city buses are also available in this area.

No subway lines in Riverdale