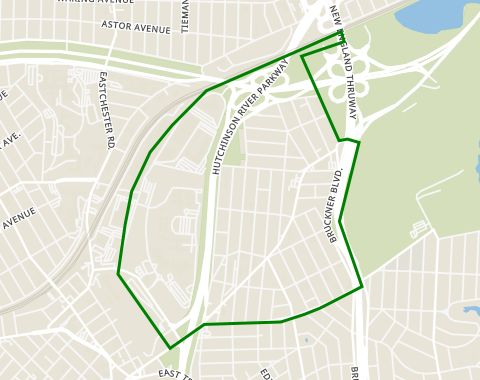 Pelham Bay derives its name from the park that makes up its northeastern border. Pelham Bay Park, the city's largest park, itself contains what was once Pelham Bay. Country Club, Spencer Estates, and Throgs Neck, more upscale waterfront communities, are considered by many residents to be parts of Pelham Bay, but Pelham Bay proper is solidly working and middle-class. Surrounded by I-95 on the east and south, and the Hutchinson River Parkway to the west, Pelham Bay is a longtime Italian American neighborhood with a notably smaller population of Greek, Jewish, and Irish descent. More recently, the area has experienced the arrival of a sizable Hispanic population, particularly Puerto Ricans. While there are more recently constructed homes, the area is predominantly made up of early 20th-century brick and wood-frame houses. Civic engagement is plentiful in the area, with banners and lights adorning buildings during the holidays. It’s no wonder the area is considered one of the best places to live in the city.

These are the average rental prices in Middletown - Pelham Bay by apartment size. To find out how much you need to earn in order to qualify for these prices, go to our salary calculator.

These trains run through Middletown - Pelham Bay. In addition, city buses are also available in this area.