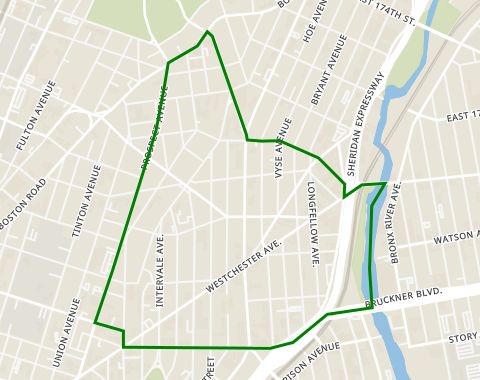 Foxhurst, sometimes known as East Morrisania, is located in the South Bronx, just below Crotona Park. The neighborhood consists almost strictly of attached and semi-attached multi-family buildings and low-rise apartment complexes. Wide avenues and streets characterize this neighborhood, that tends to also have bustling areas of business along the train lines, major streets, and boulevards. Here, you can catch the 2/5 and 6 train lines. Expect an easy commute to midtown in just under 40 mins with no transfers. Like many such neighborhoods, the real estate market is much heavier on the rentals than it is in sales. Fully renovated and even new units go for much less here than on average in the five boroughs, although as gentrification spreads through the South Bronx that may eventually change. Foxhurst offers its residents the convenience of shops, restaurants and plenty of parks and playgrounds. An interesting feature of the neighborhood is Concrete Plant Park, which is a tribute to the Bronx's industrial past as well a beautifully manicured waterfront park for the people of Foxhurst.

These are the average rental prices in Foxhurst by apartment size. To find out how much you need to earn in order to qualify for these prices, go to our salary calculator.

These trains run through Foxhurst. In addition, city buses are also available in this area.