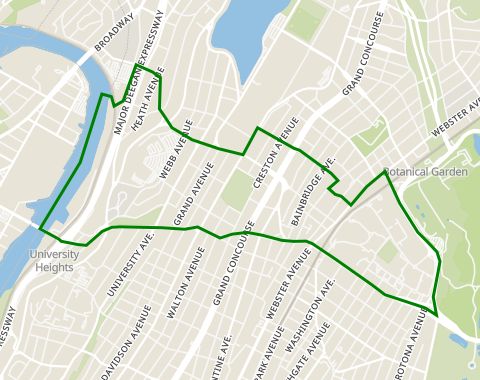 Fordham Manor is directly north of Fordham Manor and home to Fordham University's picturesque main campus. It's the oldest Catholic college in the U.S., established in 1841, and its campus clearly shows this history in its architecture and scenic campus. Fordham Manor extends all the way from Bronx Park to the east to the Harlem River to the west, encompassing James J Peters VA Medical Center. One of the best features of this neighborhood is the access to retail businesses, restaurants and green spaces. You're never more than a few blocks from a park in Fordham Manor like Poe Park, which is named after the famous writer and poet, Edgar Allan Poe. The park even features a cottage that he once lived in. Most of the neighborhood consists of low-rise apartment buildings much like what you'll find in Fordham Heights. You can catch the 4, B/D, and MetroNorth commuter trains for a convenient commute to the city.

These are the average rental prices in Fordham Manor by apartment size. To find out how much you need to earn in order to qualify for these prices, go to our salary calculator.

These trains run through Fordham Manor. In addition, city buses are also available in this area.

East Fordham Academy For The Arts

Academy For Personal Leadership And Excellence