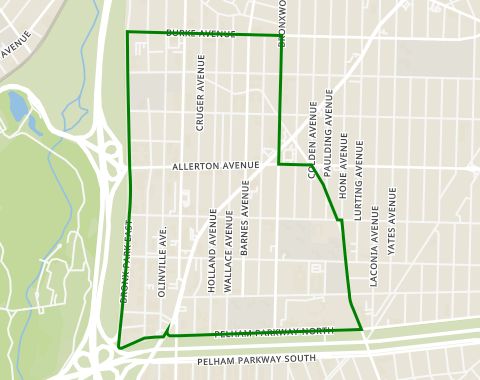 Bronxdale is located in the central Bronx, right next to the Bronx Zoo. It is also known as a subsection of Allerton--a triangle just south of Pelham Parkway. This mini-neighborhood has three train stops on the 2/5 line, and plenty of retail businesses and eateries along White Plains Road and Lydig Avenue. What's more is that Bronxdale residents have immediate access to not only the Bronx Zoo or the New York Botanical Garden, but also all the recreation area and beautiful greenery of Bronx Park and esplanade of the Bronx and Pelham Parkway. The general landscape of Bronxdale consists of low and mid-rise apartment buildings; most of them pre-war. There are a few attached multi-family houses, but these and single-family homes are extremely scarce. Median rent prices are fairly low for the city, making it a good spot for those who are looking to save but have access to a lot of greenery.

These are the average rental prices in Bronxdale by apartment size. To find out how much you need to earn in order to qualify for these prices, go to our salary calculator.

These trains run through Bronxdale. In addition, city buses are also available in this area.