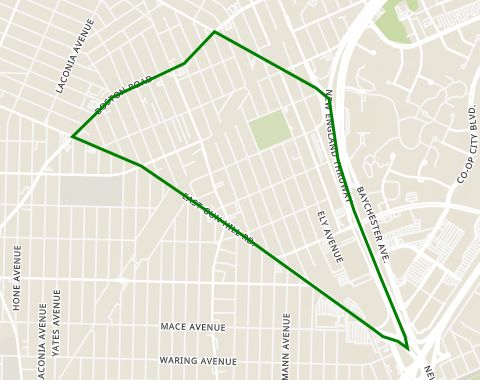 Baychester is a quaint neighborhood opposite of Pelham Bay Park on the eastern side of the Bronx. Baychester is a community away from the hustle and bustle of New York City life. The area is known for a massive complex of buildings dubbed "Co-op City". Co-op City is comprised of 35 high-rise buildings and seven clusters of townhouses and is the largest complex of residential buildings in the U.S. Baychester may be a quiet residential neighborhood, but is also home to an exciting shopping mall located at Bay Plaza, which features nearly 100 retailers. Another popular attraction for visitors and residents is Pelham Bay Park. It's not only New York City's largest public park, offering numerous recreational activties, but also a historical site of the Revolutionary War. Baychester residents not only treasure their neighborhood for its respite from the city, but also the affordable prices the local real estate market offers. The vast majority of residents are homeowners.

These are the average rental prices in Baychester by apartment size. To find out how much you need to earn in order to qualify for these prices, go to our salary calculator.

These trains run through Baychester. In addition, city buses are also available in this area.

No subway lines in Baychester